These characters can be scenic, and embellish corners giving a surreal taste to the place. They can interact with people, giving colour to events and situations.

“How does it work?” The character moves, walking in a given area. He entertains itself in poses designed as more suited to give value to the place in which it is located. Can intratain itself in small sketch and jokes with people it encounter.

A perfect hybrid of man and horse, elegant, not talking, and with superb quality of movement, able to interact with the public in silent and slow motion, creating a strange parallel reality.
The mask of excellent workmanship makes true the character. The study and the passion for the mask technique will crown the realism of the act. 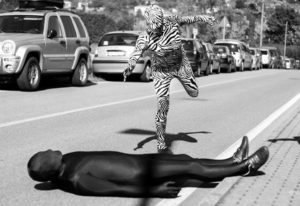 Children are wondering if they are superheroes, adults are wondering who is hiding in there, the elderly laugh at heart. No one remains indifferent. 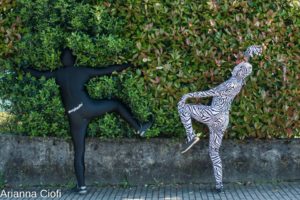 IL BALLATUTTO (the ALL DANCER) 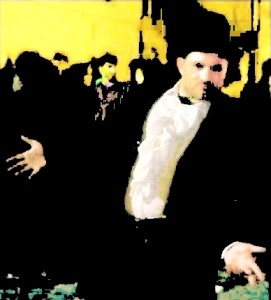 Dress of yesteryear, elegant but not too much. A handsome and smiling boy.
Soft music around, and his is will to make dance a lot of women, of all ages, everyone who he meets on the journey. Old ladies love him, the forties admire him, the girls would recommend him to friends: the new homemade Fred Astaire.
Women like to dance, let’s make them happy!

The title says it all. She is the lost ring between that beauty-perfection that have been sought for centuries and us, facing human limitations that prevent us from to mirror on that idea onday life. Perhaps humans always unparalleled in this icon, if not for some fleeting well prepared moments. 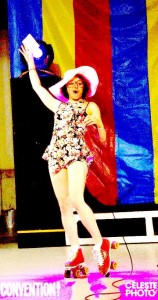 The sparkling Siora Colombo (mrs Colombo), always charmy and easy on laughters and jokes, ventures among crowds or in improper places, on skates, obviously without knowing how to go on it!
the result is a comical mix and boisterous support from those around her, sudden laughter and strokes around. 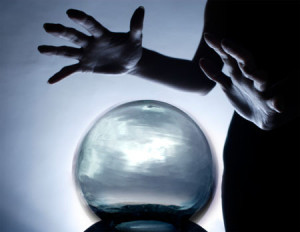 suggestive outfits and the actual knowledge of some divinatory techniques, lead the character to wander among the people, a little pinching of things inexplicably well-aimed, and a little flowing into patently absurd situations.
Possible also the unspoken version, where among pendulums, cards and strange calculations, the action give to the place an esoteric flavor.
Work that seeks to bring to more thoughtful people, reflection between what on humans is the credulity, and what instead is a suggestion disguised as a joke. 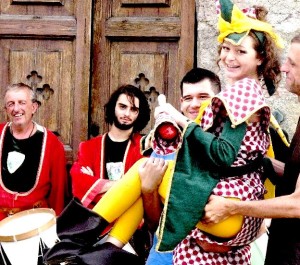 Jokes, auto tripping, impromptu find and great capacity for action-reaction, good eye in place where to exploit the preciousness with the character’s stage presence.
Some loud moments and other moments more quite. They are making treasure of the versatility and in case of need, of the brazenness, that the world grants them for centuries. 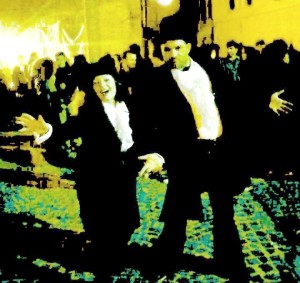 (by single artist or by couple)

In an elegant nineteenth-century dress, the auctioneer, walking with his briefcase, offers for sale, genuine flasks, which extols the properties. “Mother in law to be deleted? Problems with a colleague? A condominium diatribe? The solution in bottle! “
These are simply colored water and glitter, but the psychomagic effect purchases a much liberating feeling…

Beautiful and charming woman, in damask corset covered with a precious and large cloak. Flounced skirt in which to lose your gaze.
Unprejudiced and skillful in the women’s chatter, it transpires however a idea of ​​impending danger. Will fought by the burning desire to approach her and that urgens to escape. 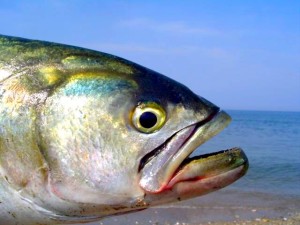 Basket, fishing pole, and a fish that has already taken the bait!
The difficulty is to catch it, and unhook it seems impossible.
Fisherman and fish engage a chase relentlessly. Laughters and twists out there. The fight goes on and already there starts some bettings on who will win.
Research on the inadequacy, and how man seeks to circumvent it. 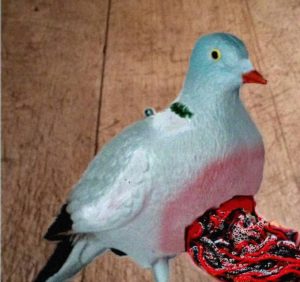 Inelegant, we must admit it. Kind of rough. “Earthy” characters. Simple, easygoing and sometimes carelessly chilling.
They highlights the evolutionary characteristic of food styles, a variety of things that characterize the epochal leap of the period in which we are living.